B1: Dynamics of an open photon Bose-Einstein condensate system

We study an open, two-dimensional photon gas in an optical microcavity, coupled to a reservoir of dye molecules. Figure (a) gives a schematic of our system. The cavity mirror separation of only a few wavelengths induces a massive photon dispersion relation with a low-energy cutoff and realizes a nontrivial ground state for the photon gas. In addition, the curvature of the cavity mirrors imposes an in-plane, harmonic trapping potential confining the photons transversally. By repeated absorption and emission processes the photon gas thermalizes with the dye molecules (at room temperature) and, above the critical particle number for Bose-Einstein condensation, a macroscopic fraction of the photons populates the ground state. Due to the interconversion between photon- and dye-like excitations, see top right panel in Fig. (a), the dye molecules act as a grand canonical (thermal and particle) reservoir, by which the photon gas dynamics can be controlled – the vision of this CRC.

As a research highlight from this theory-experimental collaboration, we have jointly discovered novel fluctuation-driven dissipative condensate states, which are revealed by the observation of oscillatory and bi-exponential dynamics of the second-order correlation function of the photon condensate, as shown in the lower panel of Fig. (a). Further results include the experimental demonstration of the irreversible splitting of light in a hybrid harmonic-double-ridge potential achieved by microstructuring one of the cavity mirrors, see Fig. (b), and the development of a new slave-boson technique that allows a theoretical description of non-Markovian system dynamics. 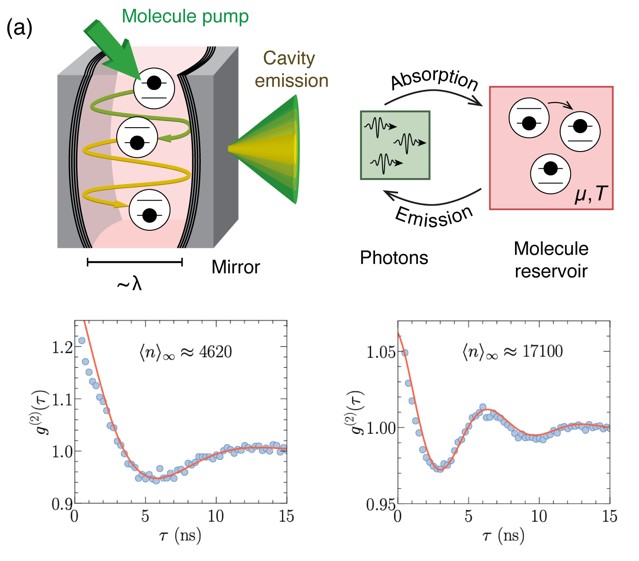 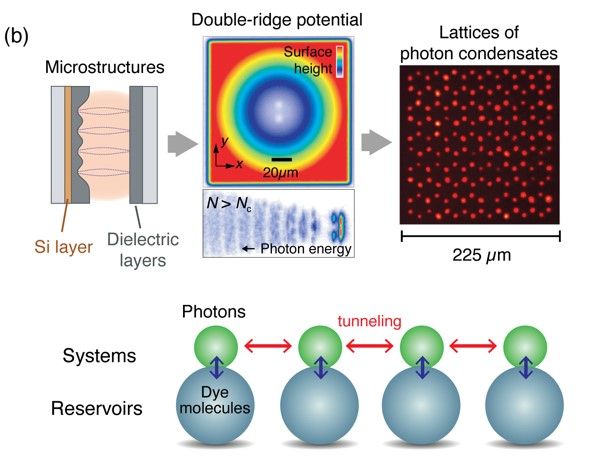 Building on these findings, we are now extending our studies of open photon condensate dynamics to spatially structured condensates. Examples for systems of coupled resonators that will be engineered to host grand canonical photon condensates range from double-well potentials to arrays of resonators, as outlined in Fig. (b). Both linear and circularly closed array structures will be investigated theoretically and experimentally, focusing particularly on the interplay between incoherent, dye-induced, nonlinear couplings and coherent Josephson oscillations between neighboring resonator sites. We expect to observe a regime of novel reservoir-mediated photon correlations and collective, spatio-temporal photon gas dynamics.

Further, with guidance from theory, we will search for the emergence of phase transitions of the open grand canonical photon lattice system, also of topological nature. To realize vortex states of the photon Bose-Einstein condensate, we will consider – in addition to the above described discrete lattice structures – continuous, ring-shaped trapping geometries, in close collaboration between theory and experiment. By linear time-dependent ramps through the condensation transition, vortex states characterized by ring currents will be statistically generated and allow to investigate Kibble-Zurek dynamics in a controlled way.