The concept of many-body localization (MBL) is one of the most controversially discussed topics in the theoretical physics community in recent years. The underlying question is at the very heart of thermalization: does an interacting many-body system reach thermal equilibrium or does it retain a memory of its initial condition in local observables for infinite times? In non-interacting systems the analogous phenomena is well-known as Anderson localization, which states that a disordered potential keeps a particle localized near the origin due to interference of multiple scattering paths. Such a simple argument does not work for interacting systems, so much more demanding many-body numerical simulations are required instead to answer the question if MBL can be observed. In this work, the authors are now able to simulate a prototypical interacting Fermion system for very long times. A related observable to the entanglement entropy is the number entropy, which is the contribution from fluctuations in the numbers of particles moving between different regions. This quantity was determined to grow double-logarithmically slowly in time, but without showing any signs of saturation even for strong disorder (Fig. 1). This is in contrast to the expected behavior from effective models for MBL and can therefore be taken as evidence that the system never localizes in the simulation. Instead the particles appear to continue to travel through the system for all times, albeit extremely slowly. While this would make the system ultimately ergodic without MBL, it must be remembered that the time of observation in real systems and in simulations is of course always finite. For real world purposes and applications (such as good quantum memories) the particles will therefore still appear to be well localized. 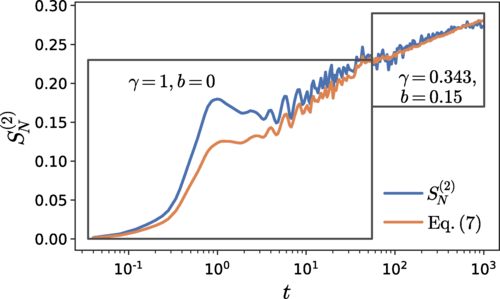 The influence of disorder on transport has long been a very active research topic in the physics community, which can give rise to remarkable phenomena such as Anderson localization or the Kondo effect. Experimental time-dependent quantum simulators using ultra-cold gases now provide the possibility to analyze the transport using fully tunable disorder potentials and adjustable particle-particle interactions. In this collaboration, fermionic Lithium atoms were confined in a hybrid magnetic-optical trap, which was then displaced in order to induce a dipole oscillation of the atomic cloud (Fig 2a). The disorder potential is provided by a laser speckle pattern, which not only dampens the oscillations but also shifts the oscillations frequency to lower values. Such a frequency shift is well-known in damped classical oscillators, but in the quantum experiment the observed frequency shifts were significantly larger than would be expected from the measured damping constants. The discrepancy is strongest for the unitary regime and for attractive interactions (BEC regime), while repulsive interactions stabilize the oscillations in the so-called BCS regime. For theoretical comparison, non-interacting Fermi gases and interacting 1D systems were numerically simulated, which confirmed the findings qualitatively. However, the observed damping and frequency shifts were always much larger in the experimental setup. This is an indication of an interesting non-trivial interplay between disorder and particle-particle interactions, which is not yet fully understood. The setup is a promising platform for further studies of Anderson localization and the analysis of the crossover to the overdamped regime in future experiments.

Fig. 2: (a) Schematic illustration of the shifted potential to induce dipole oscillations. (b)–(d) Evolution of the atomic cloud and the center-of-mass oscillation in the b) BEC regime, c) unitary regime, and d) BCS regime.

The so-called Thouless pump was proposed almost 30 years ago by Nobel Laureate David Thouless as a theoretical concept of a periodic potential moving along one direction (Fig. 3). Intuitively, the potential pushes particles which are trapped in the moving minima, but Thouless was first to realize that the particle transfer is described by a topological invariant, leading to quantized transport in each time period. Experimental realizations of Thouless pumps turned out to be rather difficult, however, not only due to the fact that coherent quantum engineering is required, but also because observation of quantized transport requires an adiabatic regime using longer time scales or dissipation. The team of Fedorova, Qiu, Linden, and Kroha now used arrays of plasmon-polariton waveguides to implement the Thouloss pump. The signal does not only travel along the waveguides, but is also pumped sideways during propagation in the array, which in turn gives evidence for the quantized transport. The main advantage of this experimental realization is the possibility to fully control the dissipation and even render it time-periodic (Fig. 3). This way the system can be tailored to remain in the adiabatic Thouless regime even for rather large driving frequencies. For the theoretical description, a generalization of Floquet theory was developed to treat non-Hermitian time periodic models. The combination of the experimental and theoretical methods pave the way for non-Hermition Floquet engineering to control periodically driven quantum systems, where tailored dissipation is actually used as a tool to stabilize desired topological quantum phenomena.