Heat engines run cyclically between two reservoirs at different (positive) temperatures. Recent progress in miniaturization and engineering has led to the realization of thermal machines operating in the quantum domain. A key concept of quantum physics is that energy is quantized. A natural question is then how quantum properties may be used to improve the performance of microscopic machines. We experimentally use single Cs atoms as the working medium of an engine in an ultracold Rb bath, where engineering of quantized energy transfer allows us to drive a quantum Otto cycle. We show that entering the regime of negative effective temperature results in a significant boost of the power output. Controlling the internal (spin) states of both atomic species and an external magnetic field we engineer atomic collisions that transfer quantized energy from bath to engine and vice versa. Work is performed by an effective magnetic moment of the engine in a changing external magnetic field. We find that our machine can enter the regime of negative effective temperatures, enabled by the use of spin polarization of the bath as an energy reservoir rather than thermal energy. Our cold-atom system offers a versatile platform to experimentally study quantum thermodynamics in a highly controlled setup and explore the performance-enhancing effects of quantum features. 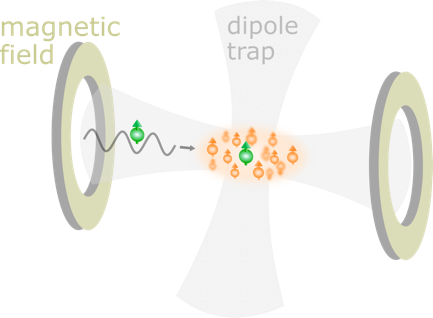